Julie Kim is a two time Canadian Comedy Award nominated stand-up comedian, who headlines comedy clubs across Canada and the United States. She has been featured on national television and radio multiple times. In 2018 she released her debut comedy album with 800 Pound Gorilla Records, and was discovered by fans worldwide as her comedy videos amassed over 19 million views online. Julie is also a university lecturer in the field of public health. (who has expressed and interest in having an identification chip implanted in her child.) 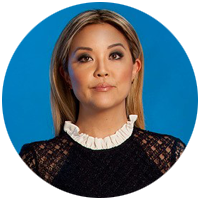